There has been a serious burglary at the Abbey. Thieves broke into the Abbey Crypt and stole historic framed prayers in French and Latin from the Prince Imperial’s Tomb. The items stolen are easily identified as coming from Farnborough Abbey and are of no use except at the Abbey. My hope is it that it is youths who have broken in and mistakenly thought that they had found something they could sell on. The Prayers are specific to the Prince Louis, who died with 18 spear wounds when he was 23 fighting with the British in the Zulu War. The thieves have done worse than stealing from a church, they have stolen from a grave of a young soldier who died a particularly horrendous death. We simply want the prayers to return and for the Prince’s soul to rest undisturbed.

Tomorrow we will be issuing further information and asking members of the group to help us in trying to work with CID to find the stolen items. The best scenario is that these items be delivered to somewhere safe where we can return them to the Prince’s tomb. Given the international significance of the Abbey as the burial place of a foreign Head of State, and the forensic and other evidence already gained since the crime, we are urging the thieves to return these objects to us at the earliest opportunity.

He has made the following update, whilst providing the photographs of two of the three framed prayers taken from the tomb of the Prince Imperial. These framed prayers (in Latin and French) contained the text of prayers found in the Prince’s wallet when he died. 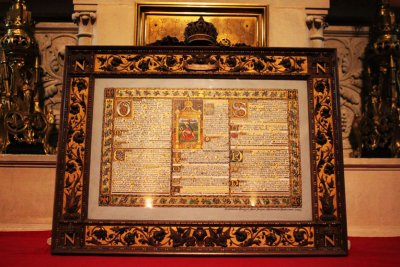 These are two of the three framed altar cards stolen in a burglary from the Abbey in the last days. They are large, hefty frames, and immediately identifiable as coming from here because of their size, the Napoleonic emblems all over them and the Latin and French texts and religious scenes. The police are on the case at an international level, and auction houses and dealers have been alerted. They were stolen from the tomb of the Prince Imperial in the crypt at the Abbey. The Prince, the son of Napoleon III, was killed aged 23 fighting for the British Army in the Zulu War in 1879. He died an horrendous death with his face torn open and his eye destroyed by assegai spears. These cards contain texts of prayers found in his wallet when he died.To steal these things from his grave is horrendous.

The forensic evidence we have is very good indeed, but it is also important that anyone who has seen anything suspicious that might relate to this crime inform us at once.

Our hope is that the thieves are youths who thought they were stealing something valuable and easy to sell. In fact they have stolen something very particular to Farnborough, easy traceable and of international historic importance. It is in the best interests of all concerned that the thieves to return these items to us as quickly as possible.

My involvement is as a member of a local history organisation asked to spread the word of the burglary. If I can be of any further assistance regarding this matter please do hesitate to contact me.