Members will recall that several years ago an appeal was launched to restore the two field guns belonging to the old Durban Volunteer Artillery, and which were used to fire a salute at King Cetshwayo’s coronation in 1873. The guns were kept without wheels and exposed to the elements in the grounds of the Old Fort in Durban for many years and were in a poor condition. We’ve just received an update on their progress; restoration has been a long and difficult process, not least because concrete had to be removed from the barrels, much of the woodwork needed to be replaced, and some of the metal parts had to be cast again from scratch. It is, however, nearing completion, and the historic guns will hopefully be fully restored by the beginning of September. The photo shows Ken Gillings – far right, who has masterminded the restoration project – together with principle restorer Rob Scott and a team from the Provincial Museums’ Services. 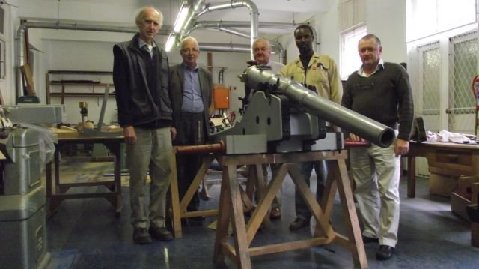